(please click the image to read)
Calvin and Hobbes are still so inspiring and this is a pale and pathetic homage to their creator. (I'm not worthy)
Bill Watterson, you are missed - please come back.

This isn't semi-autobiographical in any way...
posted by Kev Levell at 21:04 11 comments:

After comments made on the original posting from yesterday... I was encouraged to change the atmosphere on this piece, I tried to get some spooky lighting in there too. 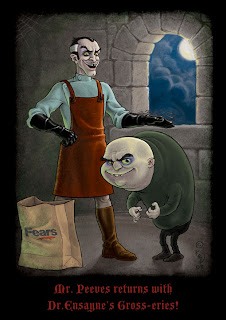 I really think it helps so, Evan and Paul many thanks guys... you were right!
posted by Kev Levell at 12:33 2 comments:

This week I am later than I'd hoped to be with this but I had to get some stuff ready for my agent to take to Bologna Childrens' Book Fair.
When I first saw the topic this week, I thought about a mangy old cat or something. But as I was working on the other project, I couldn't help but let that word 'peeves' float around my mind... it connected with Peeves from JK Rowling's Harry Potter books and it mutated from there until I had invented the characters you see below... 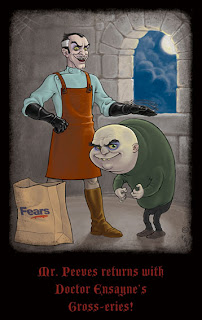 Just like everyone else, evil scientists have to get things from the shops... who better to send than your trusty servant, Mr. Peeves, he knows all the best places and looks for all the bargains too... and he'll do it all for the occasional petting.

Lots of things amused me about this, I liked it so much I have updated my website to include it.
posted by Kev Levell at 11:20 7 comments:

I've spent all week over a hot iWeb... it seems to be up and running alright. I'm moderately happy with it. Unless you are Matt Dawson I suggest you check it out via the linked image above.

Matt - my 'Crash' entry is there, please visit as and when you are ready to, no hurry!

I'd really appreciate any comments be they critical or grammatical. It might be a little rough around the edges here and there and there is another whole section of sketchbook stuff yet to build - but for now it will do.
posted by Kev Levell at 21:38 3 comments:

This was another of my favourite illustrations from the PODZ project...
This guy was supposed to be a huge creature capable of carrying a Gatling gun on his back. The thing that really made me giggle about this one was his safety goggles! Don't ask, it's simply ludicrous, but it still makes me laugh now. 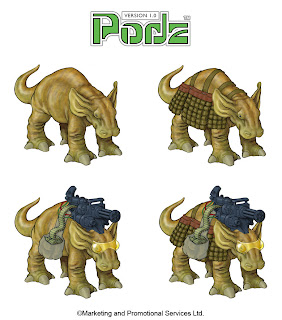 I remember being pretty happy with how this art turned out. The character design, the weapon (design based heavily on the Gatling gun) and even his grass skirt armour, something just worked for me... But if you like hippopotamuses / hippopotami and elephants - what's not to like, especially if it happens to be wielding one of the meanest weapons this side of Halo.

(How the hell does he fire it? again, don't ask, because if you do ask, Sci-Fi dribble will be made up)
posted by Kev Levell at 20:48 No comments:

This week Illustration Friday had a kind of appropriate theme for me. HEAVY... I'd been drawing this guy all week as part of my Taormina project.
He's supposed to weigh several hundred pounds... if you take a journey over to The Adventures Of Taormina you'll be able to see this guy in his full glory and read about the peril he represents for our foxy heroine! 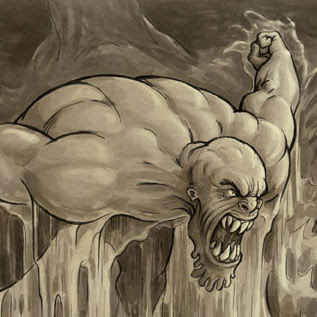 I hope you will enjoy the brief tale I have put together... there will be more episodes in the coming weeks!
posted by Kev Levell at 20:52 8 comments:

•••EDIT••• 12th APRIL 2008... Illustration Friday's topic this week is "Fail" - this failed to win the place in Fantagraphics' BEAST book... it originally failed to generate any comments! - I hope it doesn't fail intrinsically... the original posting below will give you all the details! •••END OF EDIT•••
Fantagraphics Books had an open submission to be included in Beasts Book Two. More details on the book can be found here.

I thought this might be an excellent opportunity for some exposure...
Unfortunately my piece wasn't chosen. On reflection, I'm not sure my style is particularly appropriate for them.
Here was my submission... 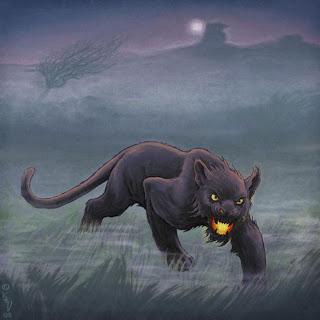 The Beast of Bodmin Moor. There are lots of rumours surrounding this creature, ranging from an escaped Puma to an 'Alien Big Cat'! There have been lots of reported sightings and lots of mauled sheep... but nothing concrete. Enter Mulder and Scully... or perhaps Sherlock Holmes is more appropriate for this interpretation...
Even the Natural History Museum in London investigated it... check it out here.
There's been a few hoaxes as well, but rest assured, I won't be starting another!

I did this illustration for a pitch for some black and white work, I liked it enough to colour up. 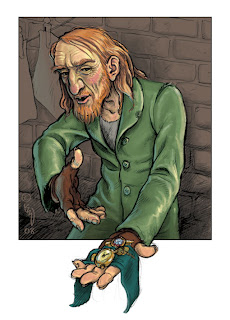 I hope it's obvious that it's Fagin from Charles Dickens' Oliver Twist.
I tried to make him look shifty and vaguely dirty. I also tried desperately to avoid him looking like Alec Guiness or Ron Moody, it's ended up more Wilfred Bramble from Steptoe and Son than anything else I think.
I had the words "You've got to pick a pocket or two..." rattling around my head the whole time I was doing it, sorry if you now have that in your head too!
posted by Kev Levell at 11:33 2 comments:

The Adventures of Taormina

I have been working on an occasional project and have started a dedicated blog for it.

In the vein of a Saturday morning serial. A mish-mash of The Adventures of Superman, Flash Gordon, Indiana Jones, Tomb Raider, James Bond, Zorro and many other influences.

There will be postings as and when I have time or when I feel like doing another "episode". Currently I am working on the artwork and story for the "first" episode... So, it really is COMING SOON!

Take a journey to the world of Taormina via the handy new link on the side bar (or click the image above).
posted by Kev Levell at 16:23 1 comment:

Look what I discovered at the bottom of the garden... I know, it's the Cottingley Fairies incident all over again. I'll nip that in the bud - this is a fake! 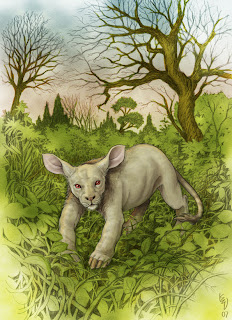 The creature is ©Marketing and Promotional Services.
The background is ©Kevin Levell

I was experimenting with different background treatments for the PODZ creatures. On the collector cards they only ever appeared on abstracted and thematic backgrounds. I wanted to ground them in reality a bit more and I think the undergrowth helps this creature. Perhaps more other-worldly flora would be more appropriate, but it might distract also and end up too alien.
posted by Kev Levell at 09:52 13 comments:

I found this competition in one of my web searches for design and illustration contests.
Harper Collins and Times Online have teamed up to run a competition to design a new cover for J. G. Ballard's "Crash" and full details for that, can be found here. 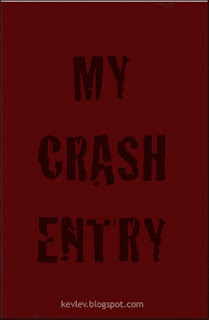 The nature of the subject matter could be described as extreme and because I wouldn't want to upset anyone, I have "hidden" my actual entry as a linked image. So, if you are interested and not easily offended, please click the image above to see my actual entry. If you would rather not see what I've done to strike a balance between the possibly offensive nature of the topics dealt with in the book and what would be palatable on a bookshop shelf - please ignore that this post is even here!
posted by Kev Levell at 17:57 No comments: 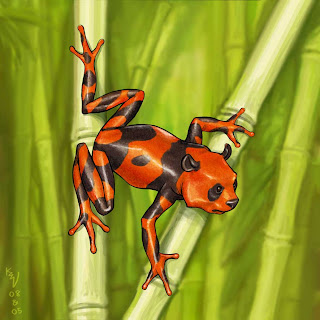 I did this a couple of years ago as a pre-cursor to the PODZ project.
The basic thing for this was to splice two unlikely creatures together...
I've re-worked it a bit, given it new line-art and a bit more texture for this week's Illustration Friday topic.
posted by Kev Levell at 16:33 14 comments:

I'm available for commissions, please contact me via the address in the left hand column for my very competitive rates or a quote.