This post marks the third birthday of my blog. Weirdly, this is also post 333, does that make it 50% evil?!

A good pal said to me over the seasonal break that he would like to see my take on The Dude, from the Coen Bros. fabulous The Big Lebowski.
I've got a real soft spot for The Dude, His Dudeness or El Duderino (if you're not into the whole brevity thing).

Like the film itself, there was a nice syncronicity to events, my friend's birthday is tomorrow, my blog would be 3 today, it was a nice quick sketch that I knew he was after and that suited my current status of waiting for feedback on the project I'm working on. Nothing was f**cked, So I drew him a card! 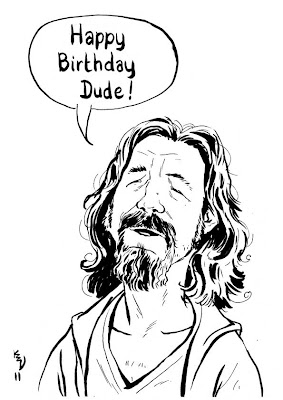 I don't think I've quite captured what I was after, but Jeff Bridges is a tricky chap to depict, even trying to get an essence of The Dude is a tall order... the desire to include (clever) quote related 'in jokes' was definitely not satisfied and originally I intended to do a group shot including Walter and Donny too, but sometimes you eat the bar and sometimes... well, he eats you!
posted by Kev Levell at 08:56

Don't worry, it's a good 'un. Recognised him before I even looked at the text.

As a TBL fan, I must say, the Dude would most likely be uttering the phrase, "like, happy birthday man."

You know what I'm sayin?

The right project might encourage me back to illustrating...